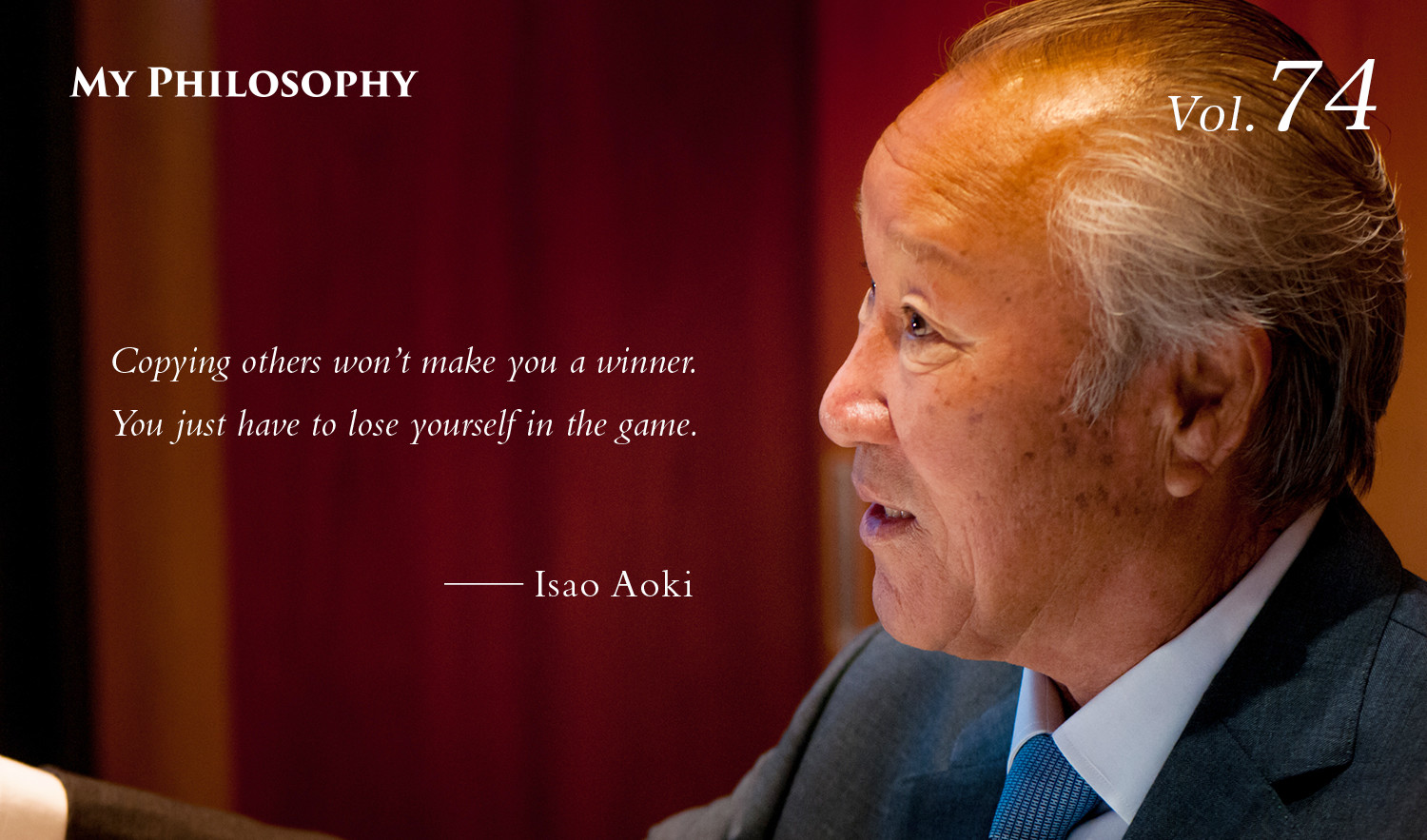 Isao Aoki is a legend in the world of Japanese golf. Having played more than 1,250 rounds, we spoke with him about how he used his experience to achieve his goals and make his dreams come true.

Professional Golfer | Chairman, Japan Golf Tour Organization
Born in 1942 in Chiba Prefecture. His interest in golf began at age 14 while caddying at the Abiko Golf Club before turning professional in 1964. In 1971, he won his first Japanese Golf Tour at the Kanto Pro Championship and would go on to represent Japan around the world, taking second place at the 1980 U.S. Open and becoming the first Japanese golfer to win the PGA Hawaiian Open in 1983. He has won 85 total major titles over his career and is second in all-time Japan Golf Tour wins with 51. He has topped the Japan Golf Tour prize money list five times. He was awarded the Japanese Medal of Honor with Purple Ribbon in 2008 and the Order of the Rising Sun, 4th Class, Gold Rays with Rosette, in 2015.
Aoki is the author of several books, including Golf-Aoki Style (Shinchosha), Victory Theory (Shinchosha), Essence of the Putt (Mikasa Shobo), and Isao Aoki Golf - The Book of Five Rings (Shueisha).
*Positions and titles are current as of the time of this interview (May 2017). 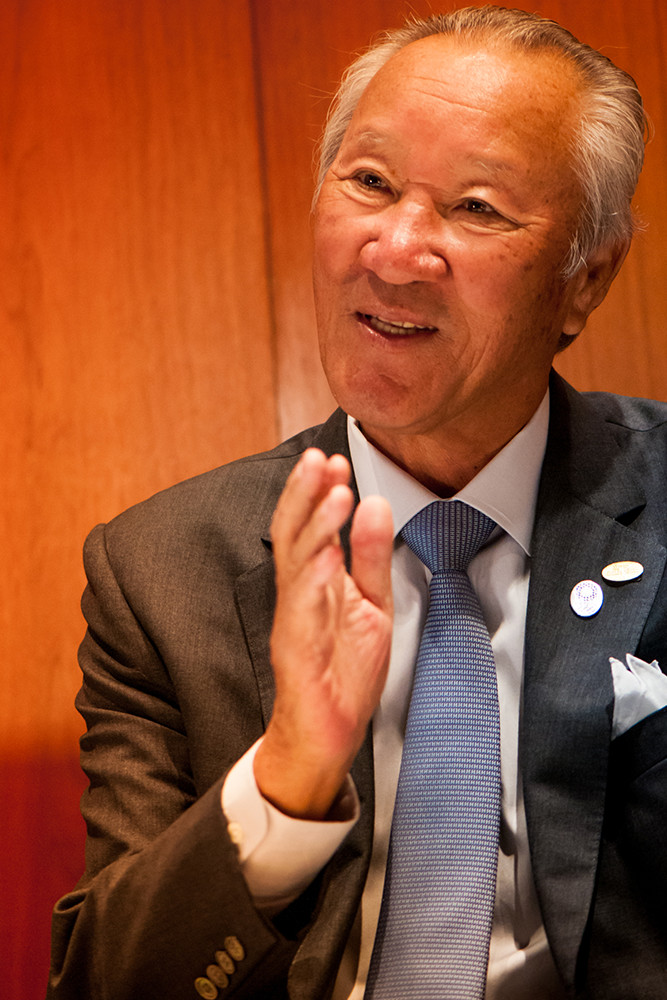 It was the prefectural baseball championships during my last year of junior high. The game was tied 1-1, and I was pitching. With two outs and a runner on third, the coach told me to force a walk and load the bases. The third base runner was trying to steal home, so after three pickoff attempts, I threw my first pitch. As soon as the runner made his start for home, I thought for sure we were going into extra innings. But the catcher, distracted by the runner, fumbled the ball and we ended up losing 2-1. In a fit of frustration, I doused the uniform and glove that my father had bought me with gasoline and lit them on fire. My father, angered that I’d destroyed my gear, smacked me around and told me to go make my own money. But how can you earn a living when you’re only 14 years old? I started working part time as a caddy at the Abiko Golf Club to earn enough money to buy food to eat. When I got the job, I just wanted to make some quick cash and never expected that I’d become a professional golfer. I was just happy to be a caddy making 50 or 60 yen a round.

After a while, my father decided to buy me a caddy bag along with my own set of golf clubs, so I handed him the few thousand yen I had managed to save from my job at the club. But when he came home with the clubs slung across his shoulder, he promptly gave me my money back. To me, this was the moment when he first understood that I was serious about golf. I took great care of those clubs and used them until I started my professional career. In international tournaments, I felt like I was representing Japan and showing the world what we as a country are made of. It doesn’t matter what other people say. It’s about how much you can handle, how long you can stick it out. And I’d think to myself?if not me, then who?

I first developed this mindset during the Dunlop Phoenix Tournament, an annual event on the Japan Golf Tournament. The tournament is held every November, and in 1974 it was promoted as an international event, inviting many leading golfers from around the world. The American golfers were coming fresh off the World Series, and they won the tournament with only a couple weeks of practice. Losing to the Americans dealt a frustrating blow to the Japanese golfers, who had practiced nonstop in hopes of winning. I think one reason why I was able to do so well in international tournaments was because I was more determined than anyone else to win back the prize money those Americans had taken.

But my first American senior tour was also a frustrating experience. On Day 3, Lee Trevino passed me to take second place. When I told my wife that I would make a comeback the next day and win, she called me a fool because unlike regular four-day tours, the senior tour was only three days long. [laughs] I had lost to him in the 1981 Casio World Open as well, so that made me even more frustrated. I vowed that I would win next time, no matter what.

No Off Season for Professionals 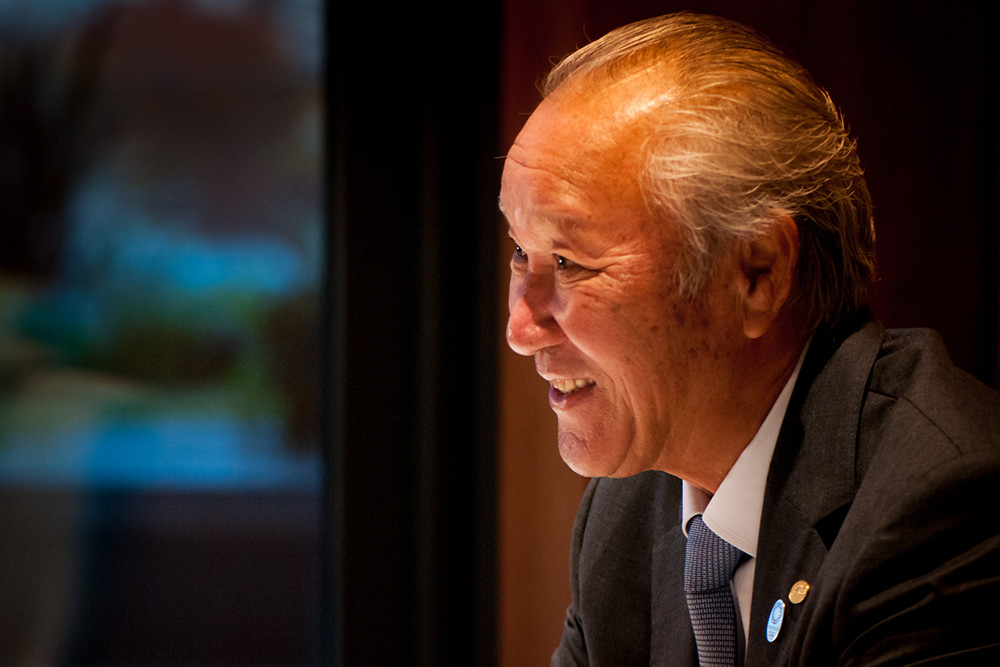 I always try to stay in peak condition so I can play at a moment’s notice. Fatigue can affect your judgment, so I always try to rest up and get enough sleep. Many young athletes these days often use the term “off season,” but I believe true professionals stay in shape and are ready to compete at any time. Once you hit the off switch, it’s hard to turn it back on. While I guess you could say golfers are off whenever we’re not touring, I believe you’re not a professional unless you can give someone an immediate yes when they challenge you to a round of golf. Fans come to see us play and cheer us on, so we have to be prepared to meet their expectations at all times.

What does it means to be a professional? It means to go out there and give it your all, regardless of whether you’re paid or not. That’s the only way to stay on top of your game. It’s up to you how you perform. It’s not about your natural talents or what you can and can’t do. It’s about the willingness to push forward and tell yourself that you can do it if you try. You have to face new experiences head on. How you choose to face them?and how many times it takes to succeed?is entirely up to you. In my case, I kept trying until I won.

Don’t Waste A Minute of Your Time 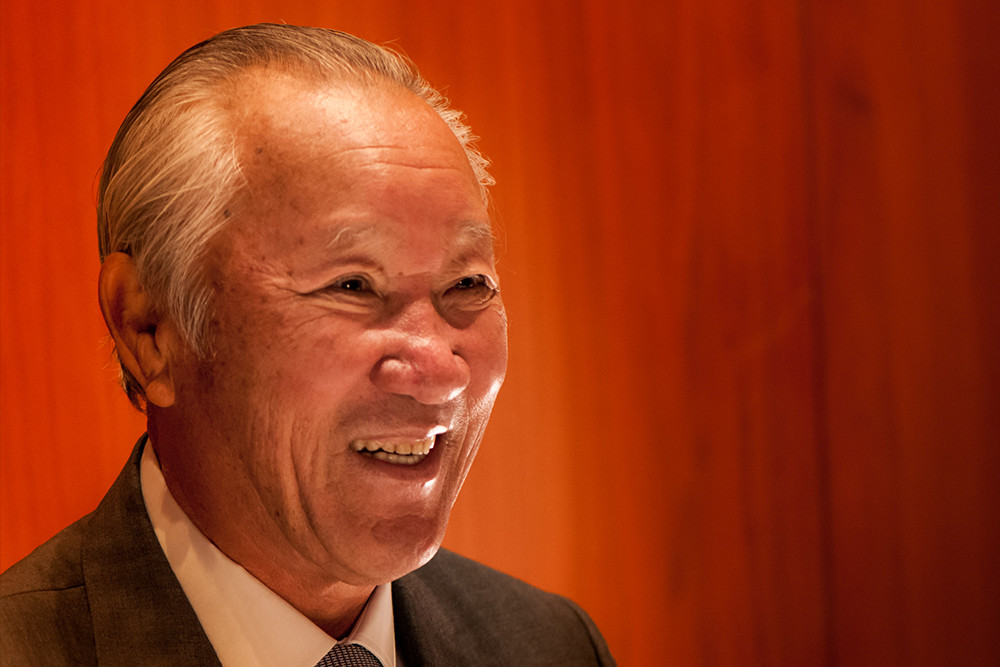 One putt can make or break a game. When I was younger, I was more aggressive on the green, telling myself that I’d win if I could sink the ball on my first putt. After several wins, I began to realize that even if I missed my first shot, I could still make up for it in the playoffs. You start to have a little more confidence, a little more room to breathe. If I tried my hardest but still missed a good putt, I would start to think about how to improve the next time around and tell myself that it wasn’t the end of the world. The desire to get the ball in the hole is strongest when you’re young and inexperienced.

One successful putt can change your life. Then again, a failed putt can change your life, too. When you’re frustrated by failure, do you shrug your shoulders and give up, or do you practice until you can put the ball in the hole every time? Nowadays you hear young athletes in post-game interviews say that they had a lot of fun even when they lose. But our generation would have never said something like that. We were full of frustration and would tell ourselves that we would never lose to anyone ever again. That’s why I’d always squeeze the winner’s hand as hard as I could. Other golfers my age like Masashi Ozaki and Teruo Sugihara were the same way. We were all hellbent on winning.

If you were given five minutes to do something right now, could you concentrate on it for the whole five minutes? You can’t beat other people if you’re doing the same things as them. When you finish working for the day you go and eat dinner?but after you eat, do you go and practice or do you just go home? It comes down to how much you can immerse yourself in your work even when other people aren’t looking. When I first started golfing I was a terrible putter, so I would be under the bug zapper at the local golf course every night practicing until I sunk at least 30 balls. I knew what I needed to do to overcome my weakness and become a better player. And that’s what I think you need to do to succeed?work with a clear goal and a solid plan of action in order to make your dreams come true. 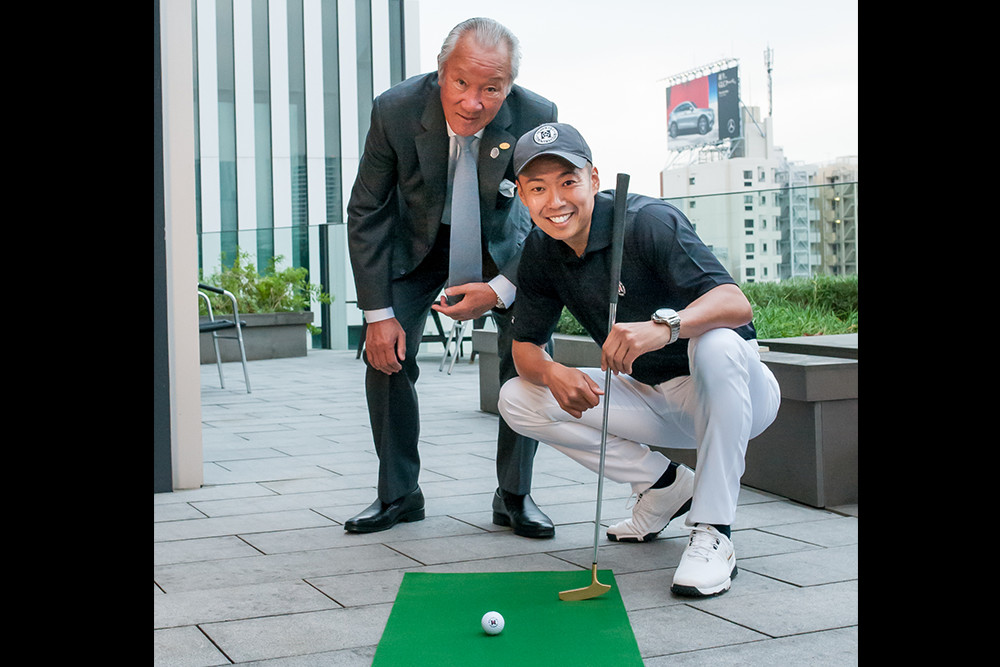 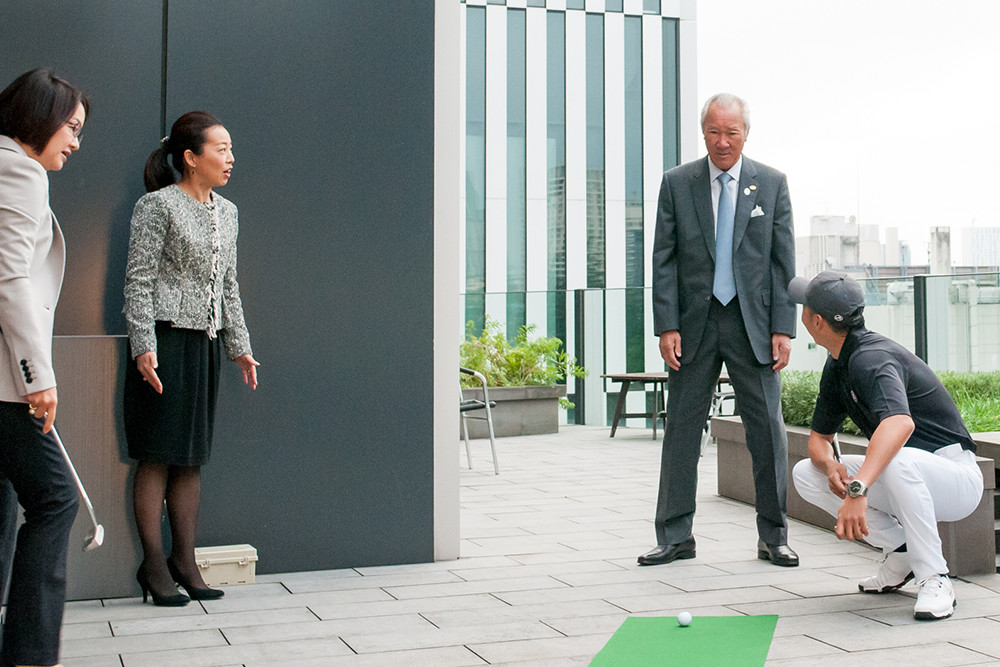 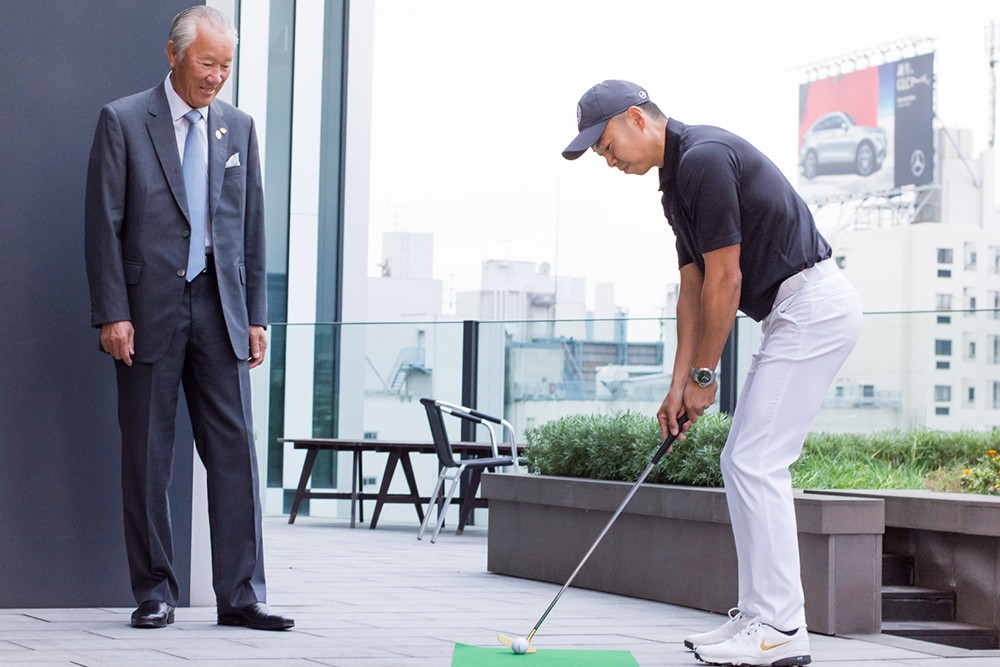 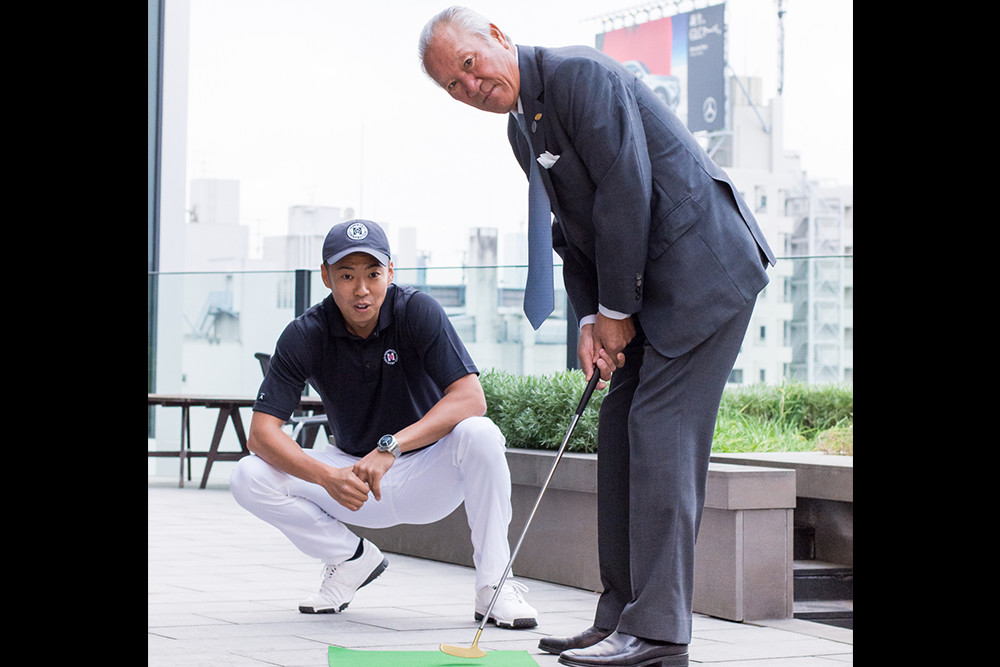 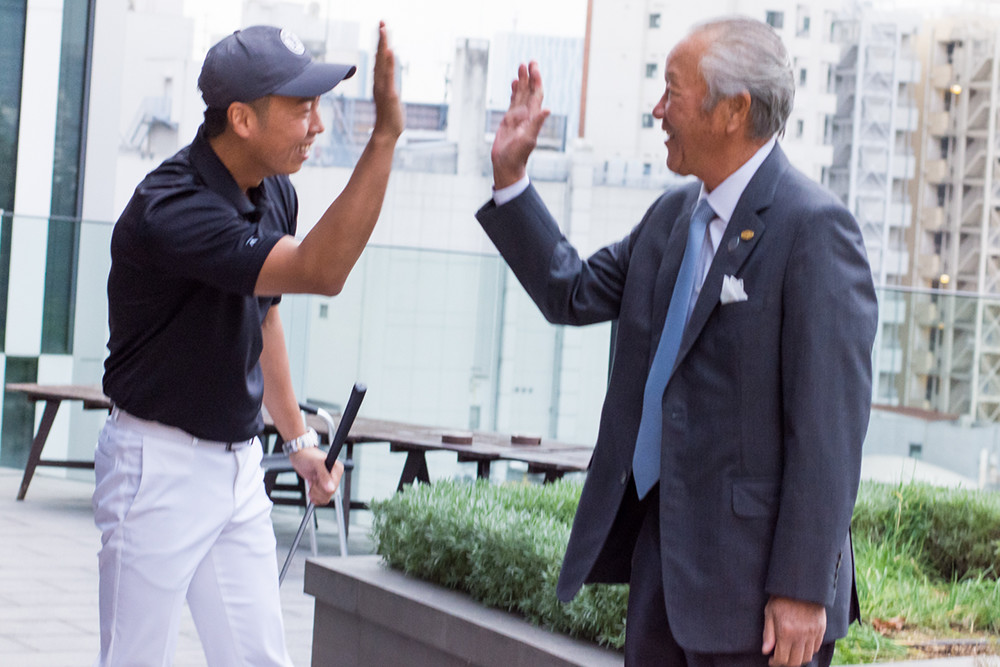 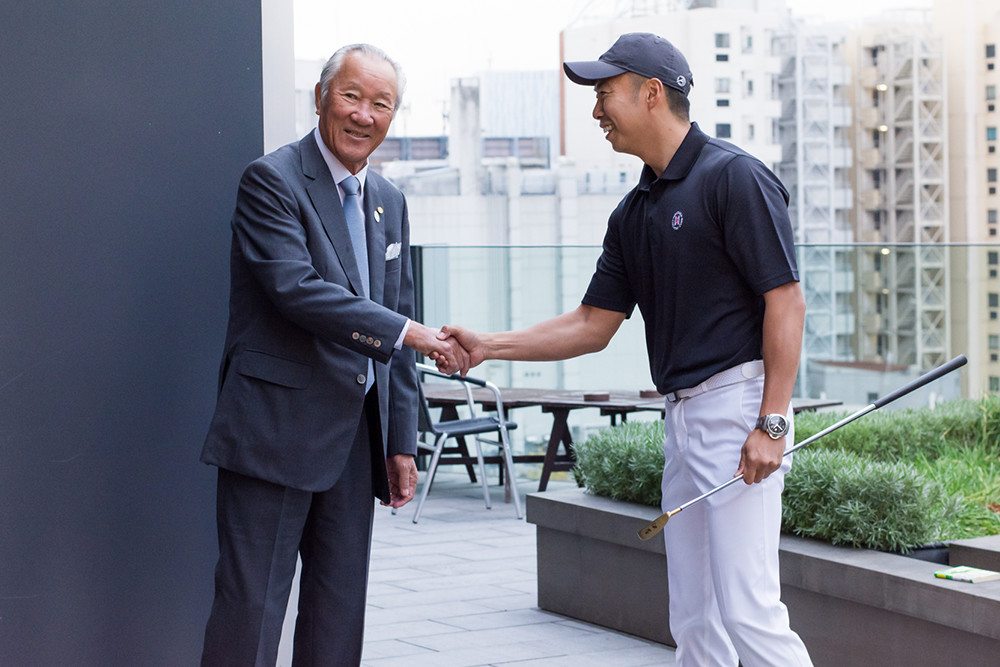 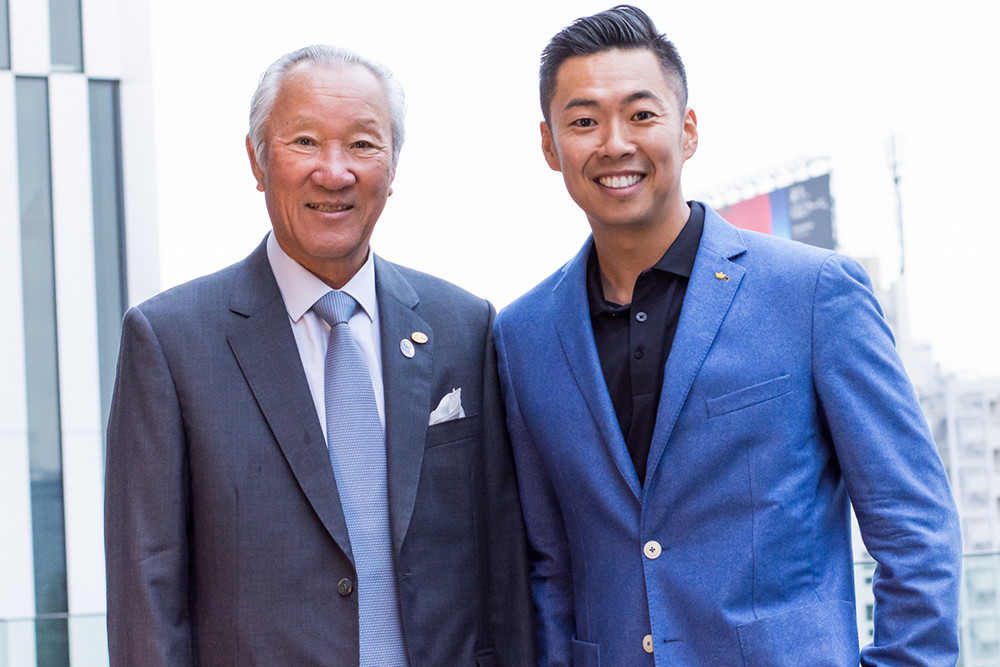 My first impression of Daisuke Sugiyama was that he had an aura of energy and confidence. Our interview went very smoothly, and he seemed to have studied my life in quite a lot detail before the interview. Just like his first impression, Daisuke was full of energy, but he was also considerate and listened to what I had to say, and I had a great time being interviewed. I’m excited to see how Daisuke will succeed in his future endeavors. I always thought that if I had the opportunity to interview world-famous golfer Isao Aoki, I would challenge him to a putting match. I even bought the same putter he uses and practiced for three months before the interview. I was inspired at Aoki’s readiness to accept my challenge. I knew the standard putting practice length wouldn’t be enough, so I added five meters to the putting mat. I missed, but Aoki got a hole in one, commenting that his desire to not lose must have been stronger than mine. I got goosebumps hearing him talk about how his aversion to losing is at the core of his success.
This interview and our putting match was made possible thanks to the cooperation of Ristorante HIRAMATSU. I’m glad that I was able to have such a great conversation with Mr. Aoki at a restaurant that I love! Thank you for your time!