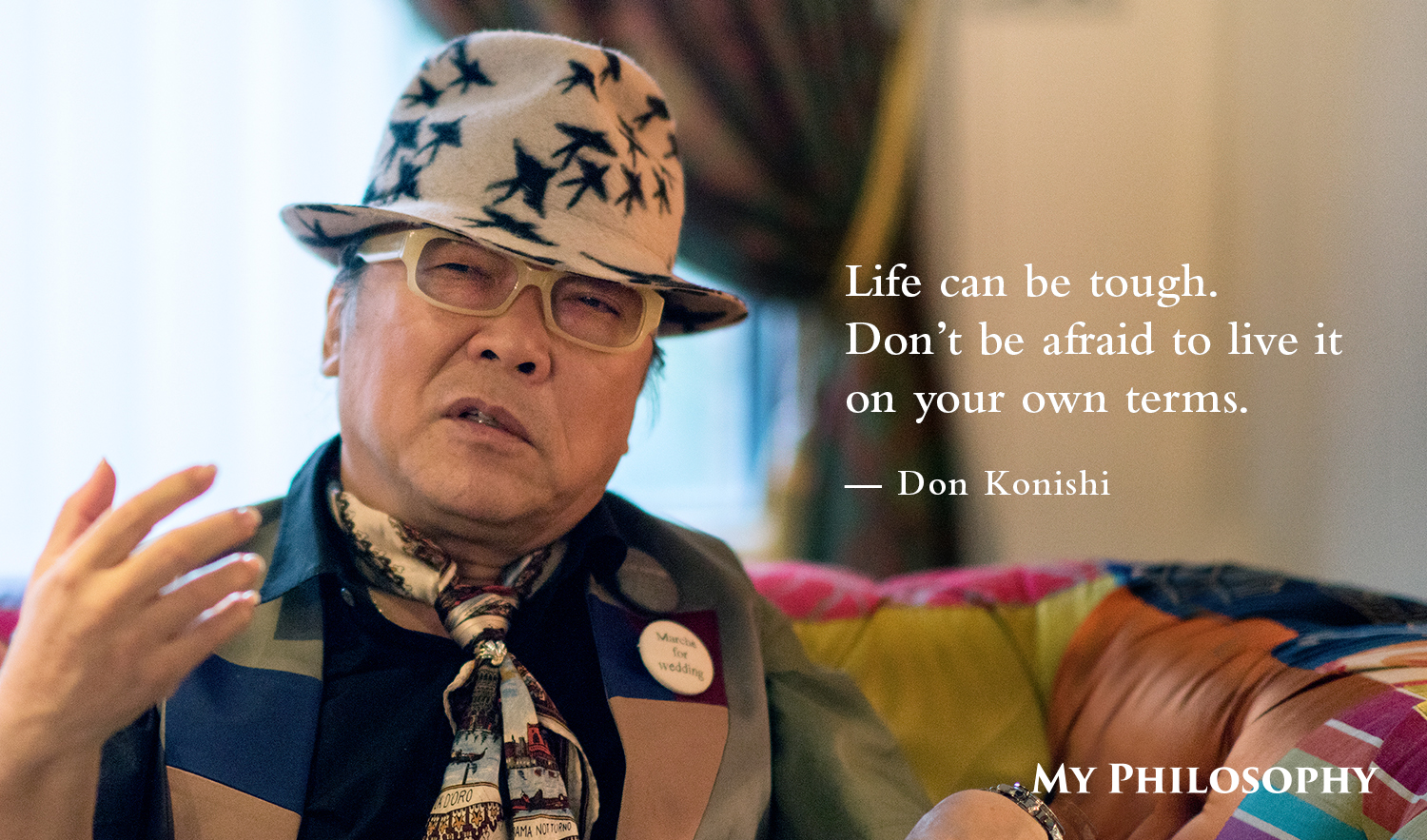 Don Konishi, fashion designer and sharp-tongued fashion critic, is a man who knows what it means to start over. Having once lost it all, he spoke with us about what he considers to be a life worth living.

Fashion Designer | Visiting Professor, Nagoya University of Arts and Sciences
Born 1950 in Mie Prefecture. Graduate of Bunka Fashion College. After working for an apparel maker, he went on to start his own brand, FICCE UOMO, in 1980. In 1991, he won the 9th Mainichi Fashion Grand Prix, the most coveted fashion award in Japan. In 1997, he made his New York Fashion Week debut. In 1998, he received the Designer Prize at the 41st Fashion Editor's Club (FEC) Awards. In 2008, he was appointed as a tourism ambassador of Mie Prefecture. He has designed numerous uniforms, including those for customs officials, Tobu Railway, and NTT DoCoMo Kansai, among others. He has also gained popularity as a sharp-tongued fashion critic on television and in other media. He’s the author of Hey, Manager! Your Underwear is Showing! (Asahi Shinsho), Adversity Will Make a Man of You (Kodansha Shinsho +α), Lecture Notes from Don Konishi’s Fashion Philosophy (Monad Shinsho), and more.
*Positions and titles are current as of the time of this interview (September 2016).

Fashion is a Reflection of What’s Inside 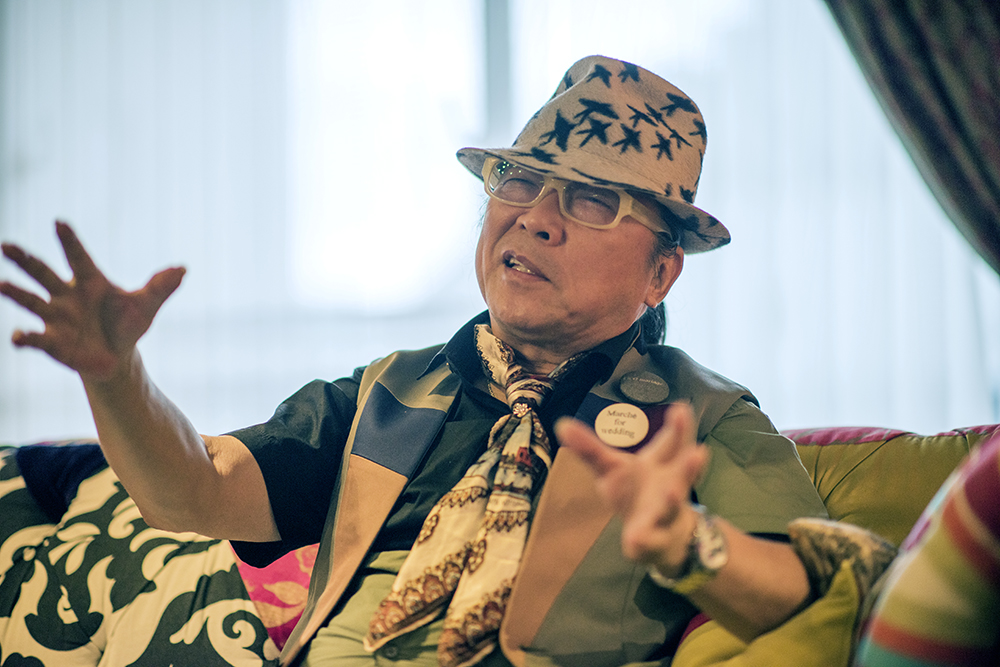 When I was working as a designer, I slept four hours a day and focused solely on making clothes—from morning to night. I didn’t realize it at the time, but what’s inside of people comes out in what they wear. This applies not only to fashion, but also to belongings and home decor, though the fashion that adorns the body is the easiest to understand. Even when a politician bows deeply, if they’re wearing a pompous double-breasted jacket, you can tell their apology is merely a charade. Even when they’re trying to ease friction with Okinawa, and they wear a Kariyushi shirt to a meeting as a sign of friendship, if it has even one wrinkle it shows a lack of delicacy, doesn’t it? It’s obvious that they’ve put it on straight out of the bag to pose for the cameras.

A person’s thoughts can’t be seen and they can’t be quantified, but what’s inside of them will come out in what they wear. I can judge someone’s personality just by looking at them, and I’m right 9 times out of 10. But that’s because I’ve spent the better part of 40 years dedicated to fashion. Younger people can’t make those kind of critiques. I can only do it because I have the advantage of experience that comes with age.

Buying a Ferrari Over the Phone 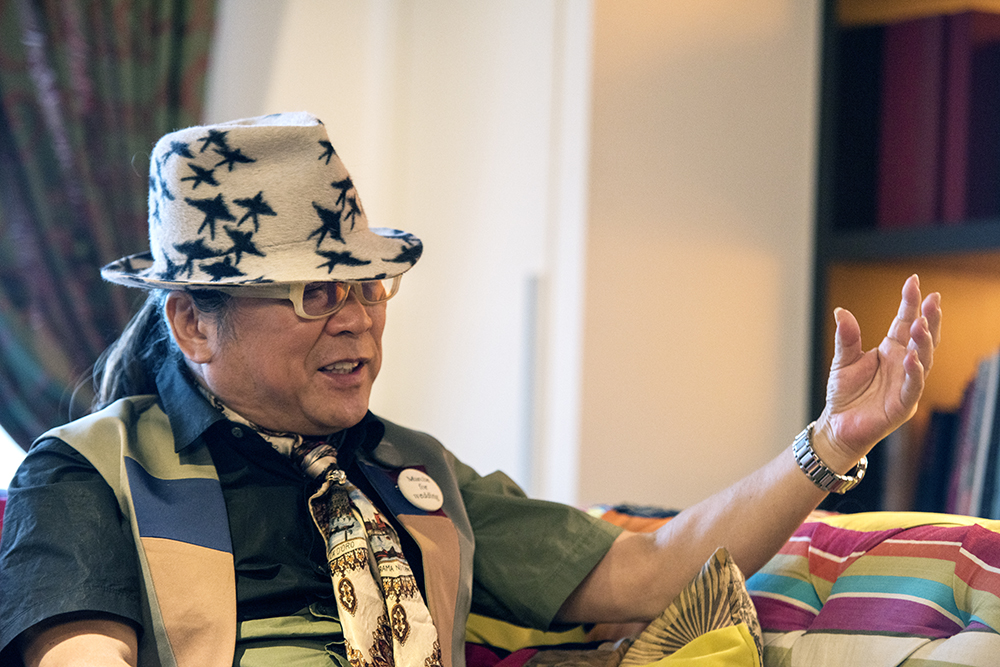 Around the turn of the millennium, when I took a more romantic direction in my work, Japan entered an age of simple, minimal design. Mainstream designs began hiding pockets and buttons, the exact opposite of mine, which focused on embroidery, patterns, and fabric textures. I sold less than one fifth of what I’d sold the previous year, and everything I had built up until then collapsed wonderfully. Trends are extremely fickle in the Japanese market, aren’t they? I wish there were more channels, more ways for fashion to get out there.

After my designs stopped selling, I hit rock bottom. But now I feel the joys of living something like a second life. I might be more productive now than I’ve ever been though I don’t have any money [laughs]. But that’s fine. At this age, a lot of my friends are turning in their driver’s licenses, and I don’t know how many more years I’ll be driving, so I find myself thinking about what my last car should be and trying to save a little more money. It’s fun. When I was making millions I could buy anything. Once, I worked around the clock for three and a half days building a huge Ferrari model that I had shipped over from Italy. It probably cost $10,000. After making the model I wanted the real thing—which was $75,000—and I ordered it over the phone. It was a kind of stress relief, I think, because I’d been working way too hard. But I can also remember, when I was young, how excited I was for a used car I bought for $6,000. I waited anxiously for more than an hour before it was supposed to arrive until I finally saw it come around the corner. You’ve got to treasure those feelings. 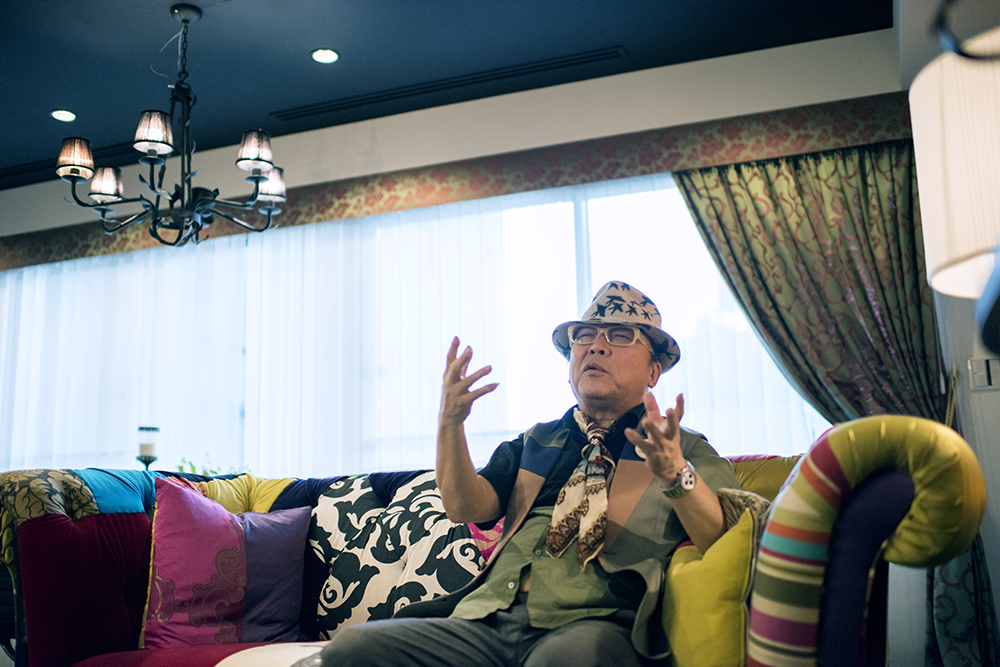 I don’t think spending your life worrying and running about in a world of someone else’s creation is any way to live. What matters is what you want to do, and your willingness to do it. I got a job right out of school and found myself becoming a complacent workaholic on a one-track career path. I didn’t have any real friends or anything that I could point to and say “this is me.” Working and earning money had become everything, so even at midnight I’d be out drinking in a shirt and tie. It wasn’t the kind of person I wanted to be. If some businessmen were nearby complaining about work while I was enjoying a drink with somebody, I’d tell them to take a hike. You should be able be yourself at that time of night. For example, wouldn’t it be strange if a person who works at a gas station wore their uniform when they went out drinking or went out with friends? You’re supposed to work hard in your uniform—a suit, for example—so that you can make the most out of your personal time. During that personal time you should wear clothes that express who you are.

Some people are unwilling to leave their comfort zones, while others have nothing left once you look below the surface. A lot of people are left powerless once they’re stripped of their titles. In Japan, people share the same values. The idea of being different is not accepted. That’s why get-rich-quick books sell so well here. But some people have good business sense and some don’t. Some people get rich and others don’t. That’s just the way the world works. Sometimes life can be tough, but finding joy in your own decisions and actions is what it’s all about. I always say that I lead an unscripted life. What fun is there in a life that goes according to plan?

The Courage to Change 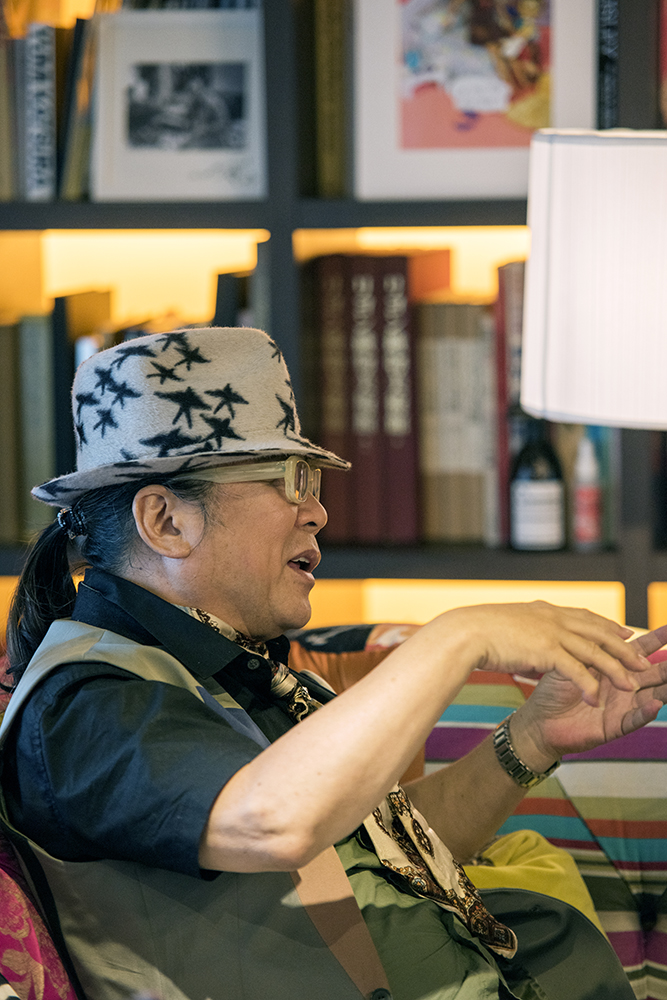 My entire life has been a gamble to become the best fashion designer in Japan. And I’ve done it without anyone’s help. Even without property or money, I’ve retained a definite sense of self, a core and sensibility that I think is mine and mine alone. That’s something that money can’t buy. The other day, I appeared on TV to do a fashion critique of Donald Trump during the first U.S. presidential debate. I can tell you that his current status, and even the people around him—including his family—were probably bought with his fortune. But there are things that even someone as rich as him can’t buy: delicacy and sense. People acquire these through their surroundings and personal experiences. What I mean is that you can’t buy them with money.

A huge amount of courage and energy is needed for change to occur. When you look back at history, terrible catastrophes often precede times of great change. It’s hard for people to change on their own. But sometimes people need to change and even give up some things entirely. I’ve been able to adapt and change with the times. I’ve learned a lot from the people I’ve met and the experiences I’ve had through fashion. Some have been good and some have been bad, but I can confidently say that I’ve given each of them my all. This has helped me in my fashion critiques and debates. I’m also involved in education, giving lectures to students at colleges and four-year universities. Recently I’ve also been getting a lot of offers to speak at corporate events. I want to teach people about the importance of developing their own core self. The people who think they’re getting ahead in life, the people in suits on their days off—these are the people who need to hear this message. Someday, I would like to create my own fashion magazine, not based on logic or anything else, but on human sensibility alone—not from the head but from the heart. 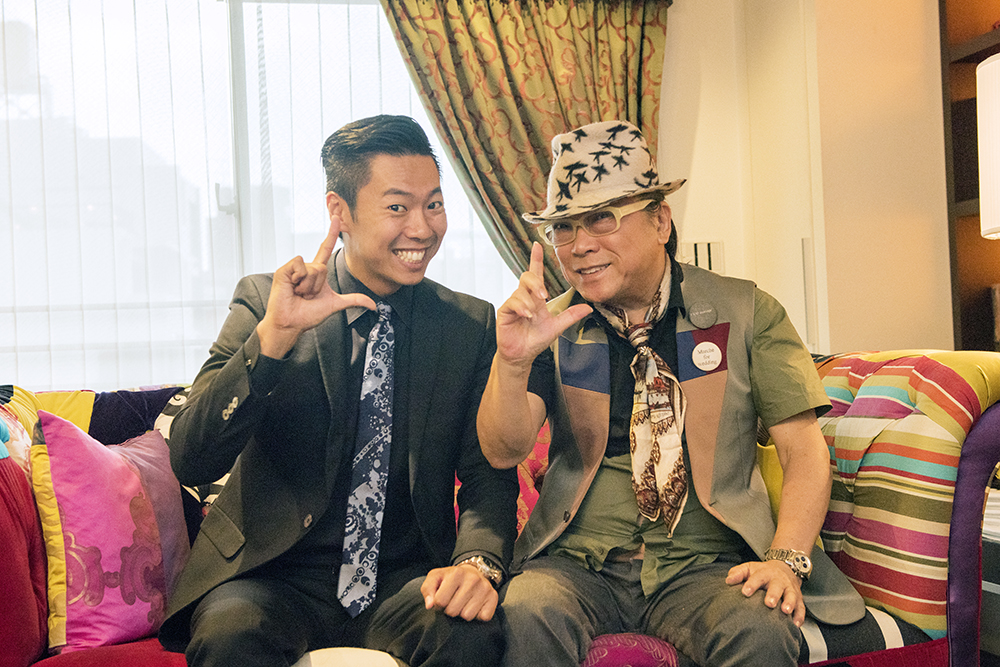 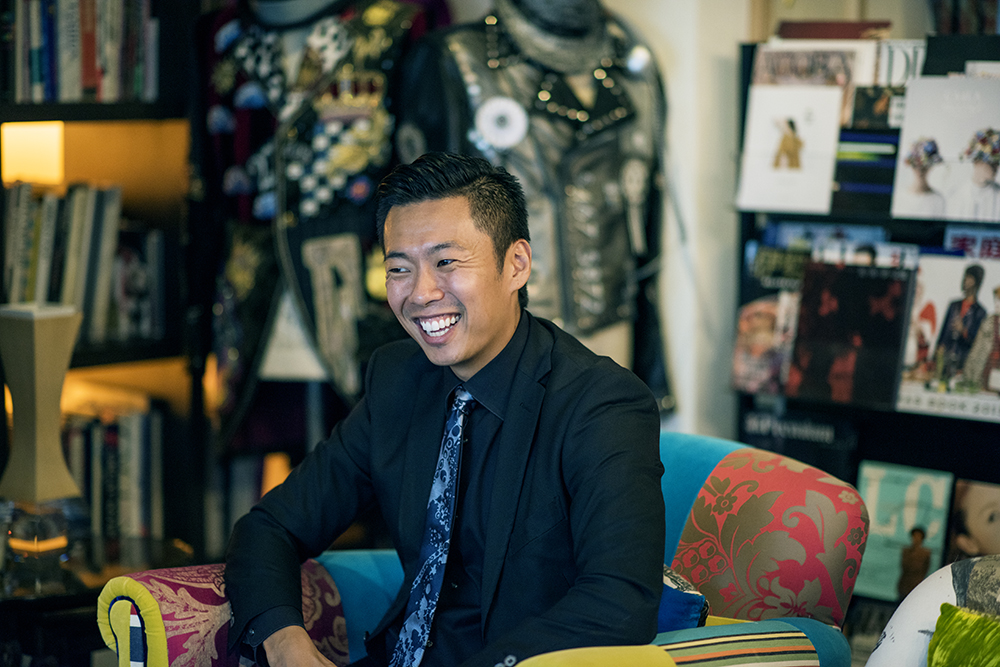 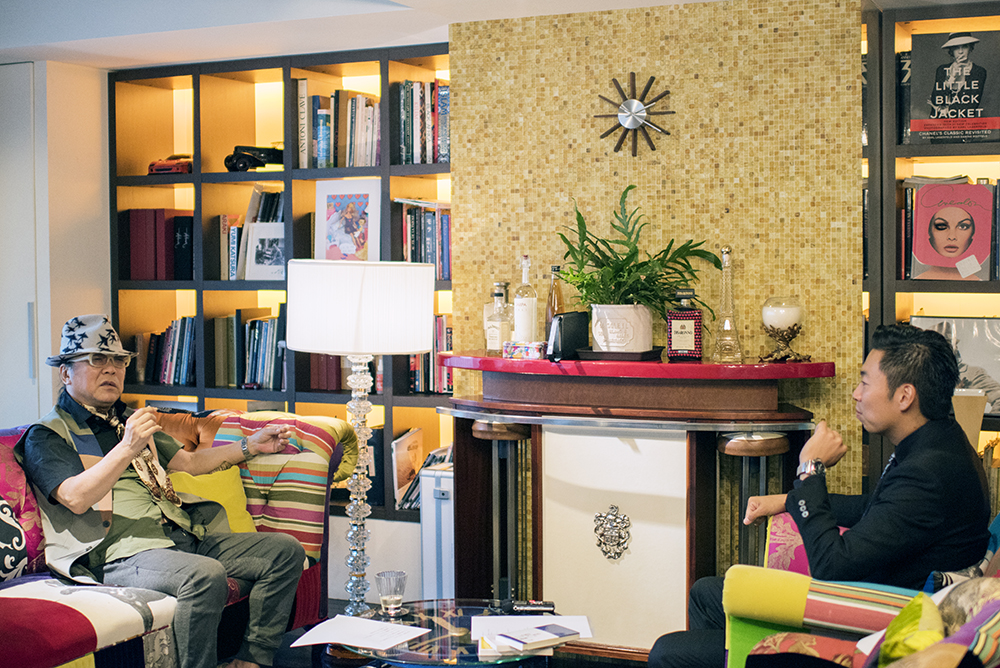 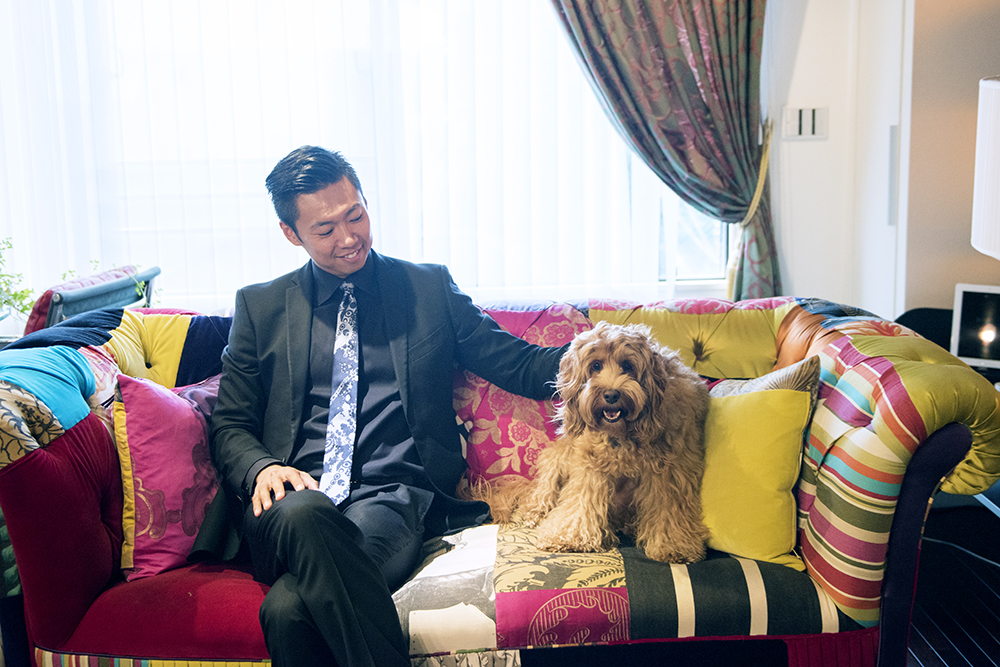 He blew me away the first time I met him! Who? Daisuke Sugiyama, of course! I’m pretty sure we first met at a late-night wine bar in Shirokane. The moment my friend introduced us, he started talking about himself. He went on endlessly about his upbringing without even being asked. Every other word was “I,” “me,” “mine”. I remember that he just kept talking about himself, though I don’t remember many of the details. And he did this for 30 minutes straight. In front of me! Don Konishi, a man known for his gift of gab. I was astonished at his lack of delicacy. Towards the end, I barked at him to shut up. It’s rare to see such a brazen, smug thirty-something, especially with all of these gentle metrosexuals nowadays!

But during the interview, Daisuke was a perceptive listener. He asked hard-hitting questions with sharp, piercing insight. He had me wrapped around his finger answering all kinds of questions about my past. And I told him, “Learning, knowledge, philosophy—those are all important, but what’s even more exciting is discovering and inventing something new each day.

In other words, just go with the flow!” We hit it off, and by the end of the interview I felt refreshed—like that feeling you get coming out of a sauna. It felt almost like a detox. It was really invigorating to get everything out there.

You’re incredible, you self-confident 36-year-old!
I can’t wait to meet up again for another drink!

My Philosophy began as a selfish project for me. Each person I’ve interviewed is someone that I’ve really wanted to meet, and I’ve negotiated with all of them directly. I do my homework, reading all of their books and preparing well-thought-out questions, so that during the interview I can surprise them. We issue My Philosophy irregularly to avoid the deadlines that produce rushed, half-baked articles. We’ve put a lot of love and passion into these first 50 interviews, and I’ve applied the lessons learned from them to my life and work. In this digital age, I am realizing the virtues of paper as a medium, and we print paper copies of every interview.

I would like to thank fashion designer Don Konishi for joining My Philosophy to mark its 50th interview. His affectionate insults are the best [laughs]. His idea about going with the flow is a necessary way of thinking about life in today’s world. After the interview, Don Konishi gave me his trademark fashion critique saying, “Your suit is alright, but it doesn’t have that rich, sexy look.” He even promised to make me my own original suit, something I didn’t expect.

My Philosophy continues to evolve with each interview, expanding in directions that I never could have imagined.