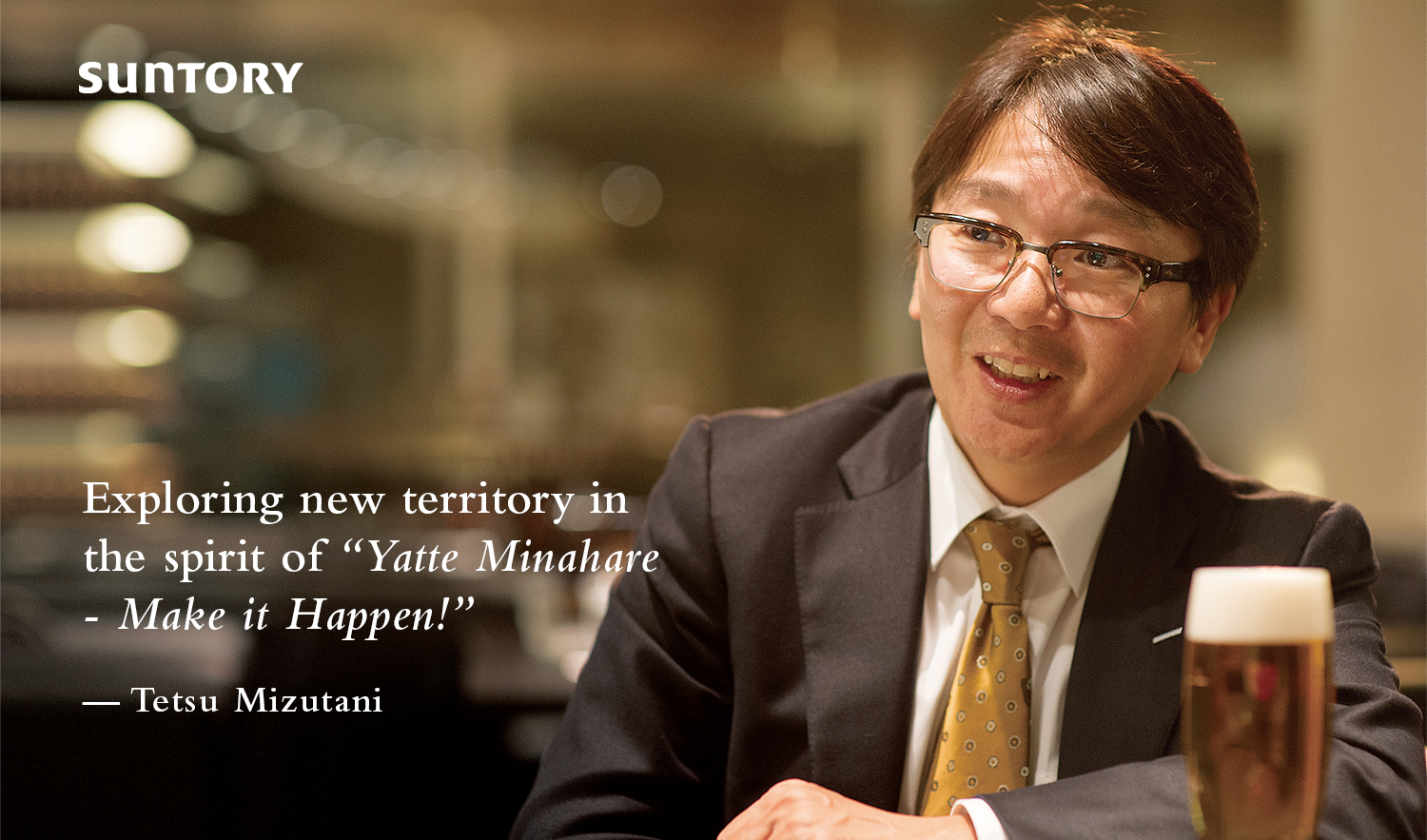 Suntory Beer Limited was established as a new company on October 1, 2014. Its first president, Tetsu Mizutani, is the man responsible for the hit "Kaku Highball." Tracing his career and the paths he chose, we can find hints about how to approach our own j

Suntory Beer Limited - President, Chief Executive Officer
Born in Tokyo in 1961. Graduated from the Faculty of Law, Sophia University. Joined Suntory in 1983. Served as the Senior General Manager of the Planning Department in the Alcoholic Beverages Division, Senior General Manager of the Whiskey Department and Senior General Manager of the Spirits Department before being appointed Executive Officer and Group COO of the Group Strategy Planning Division at Suntory Holdings Limited.Appointed Managing Director, Member of the Board, Chief Operating Officer, Beer Division at Suntory Liquors Limited in 2013. Appointed the first President and Representative Director of newly established Suntory Beer Limited in October 2014.
*Names and titles are as at the time of the interview (March 2015).

I was appointed Senior General Manager of the Whiskey Department in 2008. The whisky market had been in a downtrend for the last 25 years, and then-President Saji (current Chairman of Suntory Holdings) called me in and said, “I want you to approach this like you are building a new business from scratch.” I knew that when you are trying to do something new, you have to go right to the source, right to where things are happening, so I began going around to different bars, and what I noticed was that there were lots of bartenders mixing our “Kakubin” whisky with soda to make highballs. I analyzed the sales and found that our only growth was in on-trade sales of Kakubin. One day I was at a bar in Ginza and saw that almost all of the customers were drinking Kaku Highballs, and I intuitively understood that this was our opportunity. I organized a team of young employees, and we focused our nationwide sales efforts on highballs, but had absolutely no success. I had begun to think that it was hopeless, but then a new bar opened up in Ginza that specialized in highballs, so we worked with them to really push Kaku Highballs. At a normal izakaya-type establishment, they would generally sell between three and five highballs a day, but this bar was selling 100-200.

It fit with what people wanted. Tastes had changed, and the market was looking for a new beverage that work well with food and had neither the bitterness of beer nor the sweetness of chuhai. I saw how much people enjoyed the drink and knew that there was a future for whisky. I was trembling; I knew I had a winner. That bar became the center point, and the highball boom spread far more quickly than I could have ever imagined. 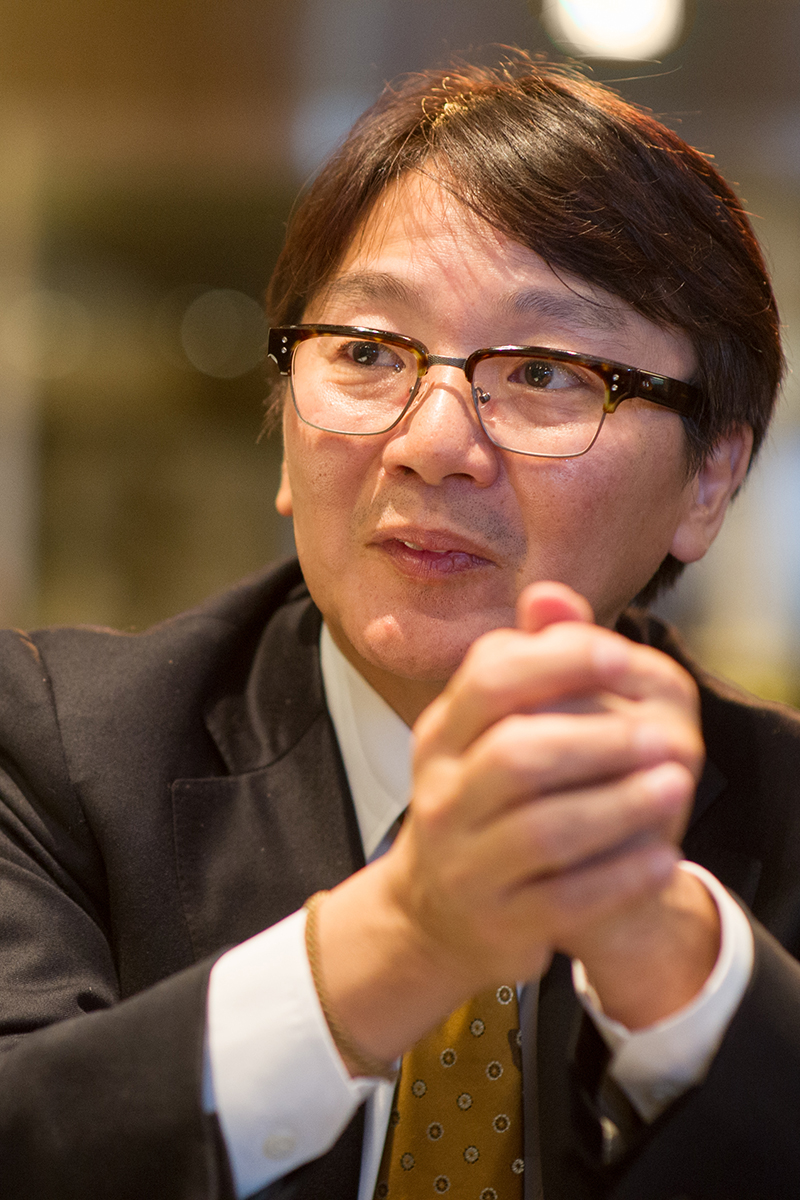 I was in soft drinks when I first joined the company. This is now one of the core businesses of the Suntory Group, but at the time it was a very small department. I joined Suntory because I liked booze, and was a bit put off by being the only one among my peers who was sent to soft drinks. I talked with the head of the Beverages Department and asked him what I needed to do to bring the same amount of profit to the company from soft drinks as spirits and liqueurs, and he told me, “If you can generate 500 million yen in sales a year, you will bring more profit to the company than an alcohol salesperson.” I had a goal! My target was to create a market with sales of 500 million from scratch. I got up every morning at 4:30 and went to the market, looked for supermarkets that purchase large amounts of soft drinks and tried to sell to them. In areas where beverages weren’t selling well in the stores, I aggressively installed vending machines. And in about four years, I had reached the 500 million yen target.

It was around that time, when I had decided that soft drinks might be a pretty good career, the department head was tapped to manage the spirits and liqueurs division, and brought me with him into the Whisky Department. At the time, however, shochu was all the rage, and it didn’t matter what we tried, the demand for whisky would not recover. My next step was to join a newly-established sales section within the department and to improve our selling capacity. At the time, alcoholic beverages were sold in liquor stores, but liberalization was proceeding, and I knew that at some point supermarkets would obtain liquor licenses. When that happened, there would be significant changes in market share because customers would be able to choose products freely from the supermarket shelves. That told me that I needed to understand distribution, so I went to speak with food processing companies who were selling successfully at mass-market outlets, and I attended study groups on the distribution industry.

We were faster than everyone else to adapt to the changes in distribution, but just about the time sales started to turn upwards at supermarkets and mass-market liquor stores, I was transferred to the product development department within the beer unit. What we came up with there was “Nodogoshi Happoshu 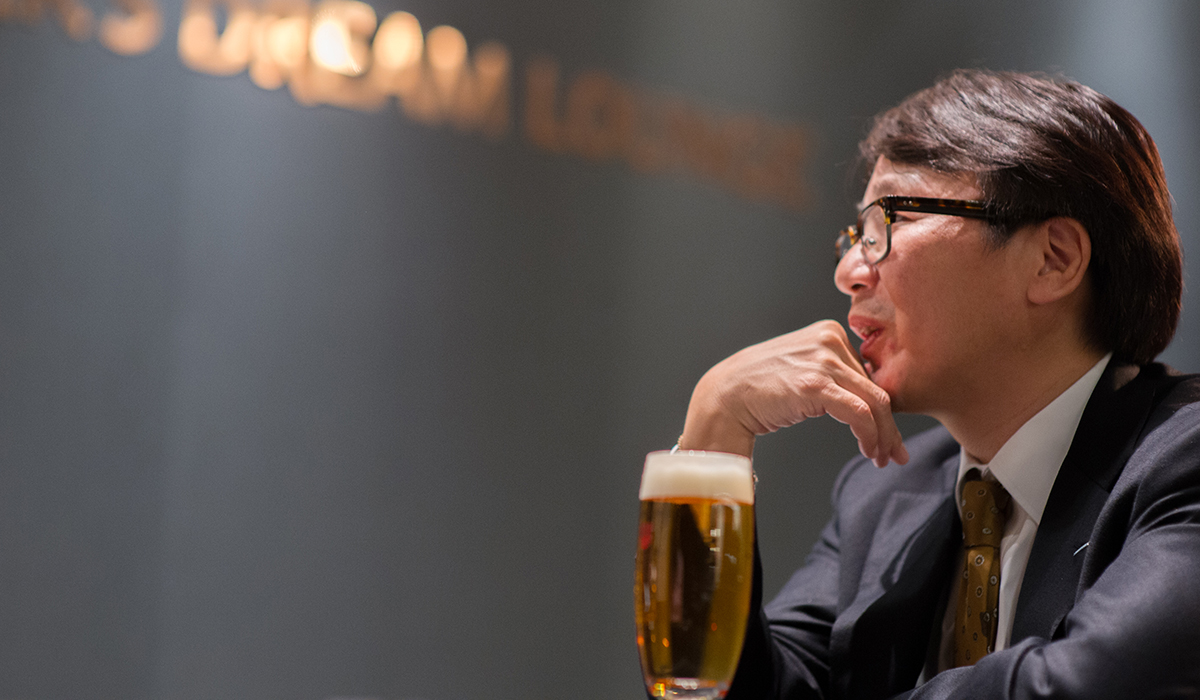 I was very small as a child, and when I was in junior high school, I decided to join the karate club because I wanted to become stronger. I practiced twice as hard as anyone else, and earned my brown belt, and then my black belt. In my third year of junior high school, I joined the ski club, practiced hard, and finally became good enough to be sent to the national competition. These experiences taught me that if you put in the effort and work harder than others, you’ll see results that will come back to benefit you, and that gave me confidence. The thing is, working hard on your own, the highest you can go is probably team leader or so. If you’re in a general management position or higher and still trying to do everything on your own, no one is going to follow you no matter how hard you work. It was just at that point in my life that I became ill, and that turned out to be a good thing. At the age of 42, I spent two weeks in the hospital. This gave me a chance to think back about my life and what I had been doing. I realized that work was not all there was to life, and that made me a better, stronger person. 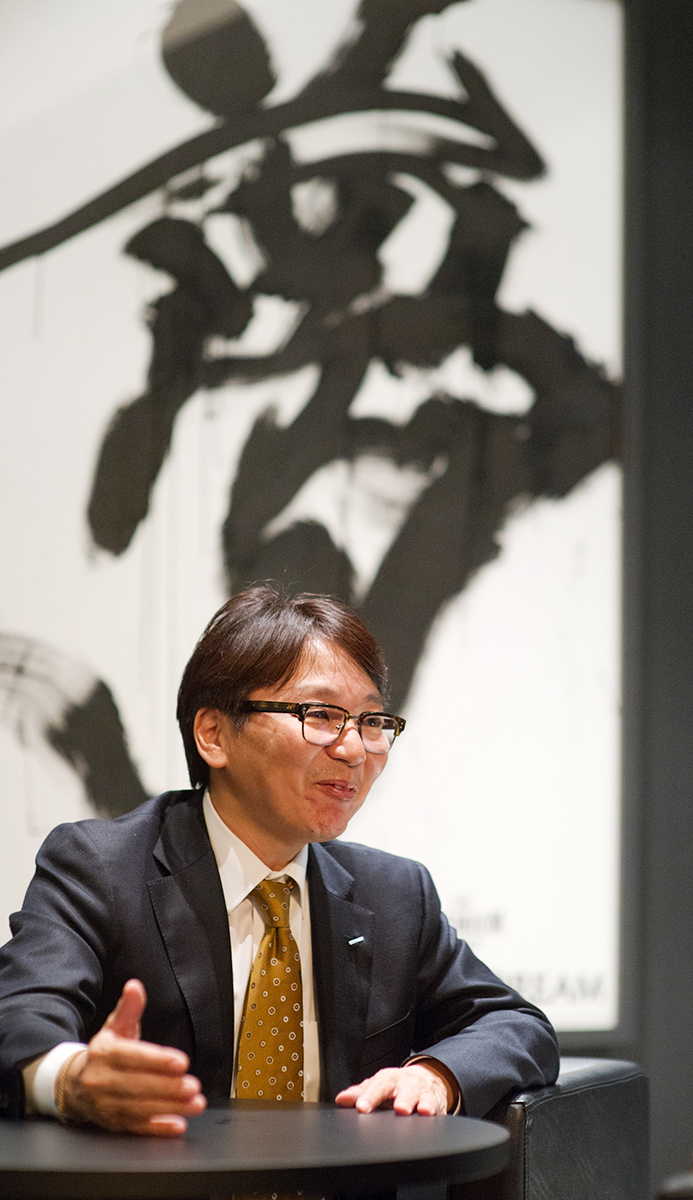 On March 17, 2015, we launched “The Premium Malt’s Master’s Dream,” and it really is a dream product for us. Our goal, our dream, was to make a beer that was so delicious it would set your heart flutter, and we worked with the brewers for a decade to come up with something completely new and different. The launch took place just as the brewing unit was spun off as an independent company and I was appointed president. This is something that gives me a lot of joy, and I also feel a responsibility to develop this beer in the market. In the past, our image was one of “beer made by a whisky company,” but we were able to change that perception with the new product’s predecessor, “The Premium Malt’s.” Premium Malt’s is a beer that shares much of the same worldview as whisky, a beer that you want to drink slowly at the end of the day as a reward to yourself. That matched perfectly with the image that Suntory enjoys among its customers, and is what propelled sales. I think that what we, as a company, need to do is to continue to explore and innovate, but in ways that focus on the essential nature and core strengths of Suntory.

An older colleague once told me, “You can’t change the past and you can’t change other people; all you can do is change yourself and the future.” I like those words. Nothing changes if all you do is analyze past failures. You look back, but the purpose is to achieve your dreams for the future. We need to understand the hard work, successes and dreams of the many people who have gone before us, we need to understand how Suntory got to where it is today. In fact, I think it’s crucial that we respect and maintain that history. But we also need to continue to work towards the future, towards our dreams and passions. That is what inspires me. 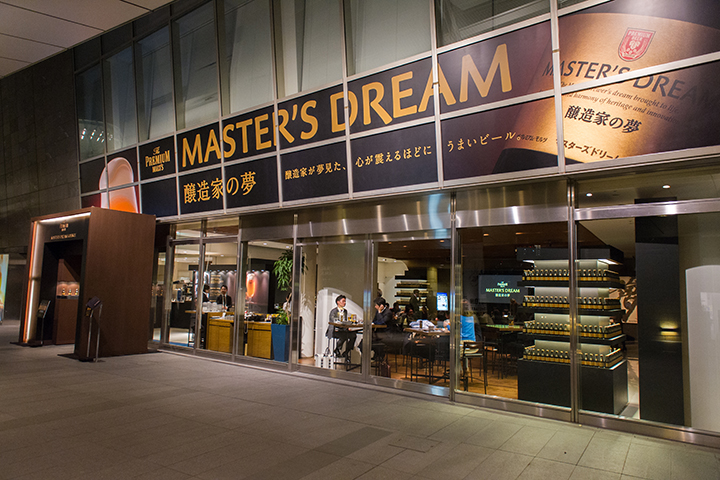 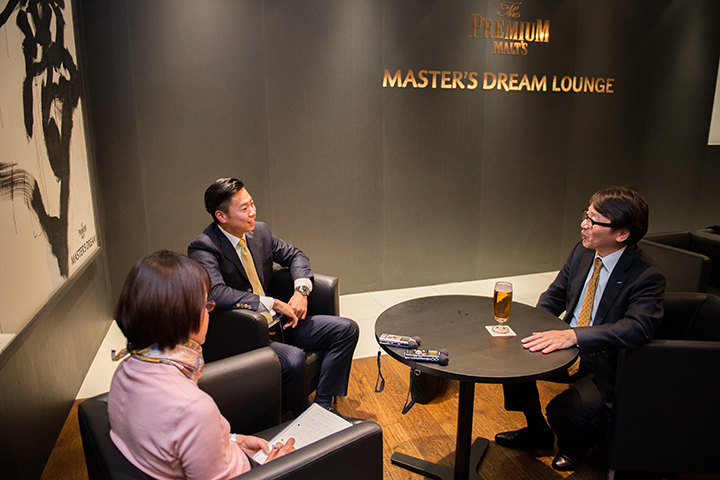 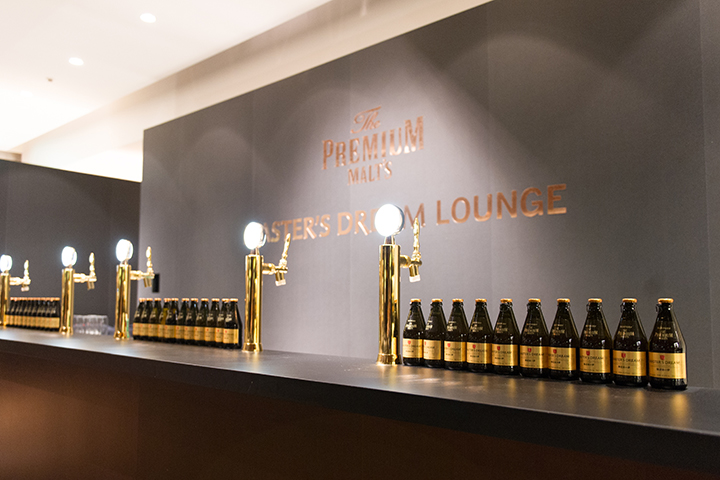 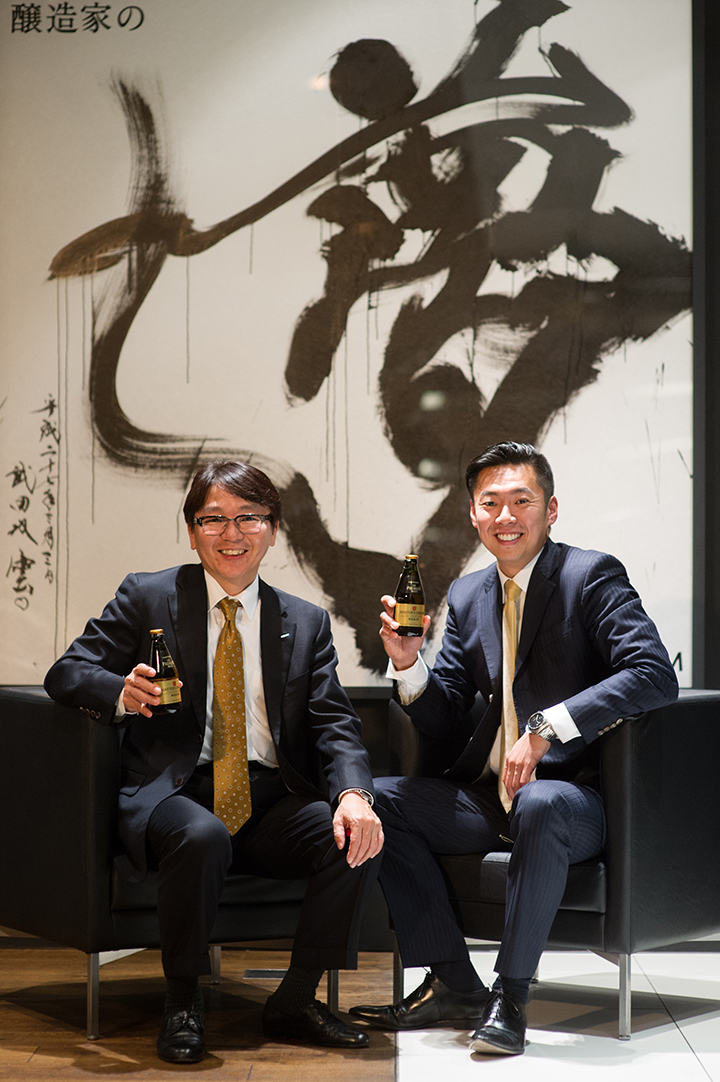 When I look at Sugiyama-san, I feel “energy full of the courage of youth.” What I like most about his books like ‘Creating Your Luck’ and ‘The Courage to Take Action’ is how energized I feel after I finish reading them. This interview energized me, and it was great fun talking with him.

Through this interview, I felt how strongly President Tetsu Mizutani loves Suntory, and the weight of the responsibility he feels for the company’s numbers and results. “The Premium Malt’s Master’s Dream” is a beer that builds on Suntory’s history and incorporates its “cumulative value.”
“Yatte Minahare – Make it Happen!” is exactly the attitude that Japan needs today.